Girolamo Frescobaldi, a famous 17th-century composer and organ-player, is most renowned for his instrumental pieces. He however left us with two aria books for one or several voices and basso continuo, which are extremely rich from a musical and expressive point of view. At a time when budding Opera pieces were dawning on the musical stage, we could find this new kind of vocal writing in chamber music pieces. Resembling mini-Opera pieces – sometimes closer to popular songs and sometimes more scholarly in the way the recitatives were written – these works make it possible for listeners to hear a wide array of feelings, expressed during a revolutionary musical era. The alternating measured arias (either for solo or polyphonic performance) and pieces in the same style as Italian recitar cantando – such as Cavalli or Monteverdi’s Operas – mean listeners can appreciate a wide array of the styles most popular during the flamboyant 17th century in Italy.

This programme was recorded onto a disk in collaboration with Glossa in spring 2017. Not included on many disks, these arias by Frescobaldi will help the general public appreciate the work put in by the Banquet Céleste’s solo singers and instrumentalists for the 17th-century Italian repertoire, and provide a different vision of the music composed by someone mostly known for his instrumental pieces. 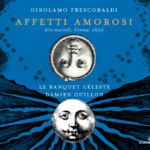